Biodiversity in the Andalusian mountain olive groves in Spain

The Spanish case study region analysed within the PROVIDE project is Autonomous Community of Andalusia, located in southern Spain. Andalusia has a population of 8.4 million of inhabitants and 87,268 km2 of area. The GDP per capita is €16,884/year. The agriculture and forestry sector accounts for 4.7% of GDP and 7.4% of workforce in the region (period 2008-2013).

The region has a heterogeneous geography with four main parts, namely: i) the Guadalquivir Valley, ii) northern low mountain range of Sierra Morena (where mountains below 1,000 masl), iii) southern-eastern big mountain range of Sierras Béticas (with some few peaks over 3,000 masl in some parts), and iv) southern and eastern semi-tropical coastal areas.

With regards to the regional land use, according to the Yearly Handbook of Agricultural Statistics 2012, the land is distributed as follows: 44% agricultural land, 16% grasslands, 32% forest, natural and semi-natural land, 5% urban areas, and 3% other areas. Olive groves are the main crop, representing 40% of agricultural land (around 15,000 km2 – one third of which is irrigated). Also of importance are herbaceous crops (9,000 km2 rainfed and 4,000 km2 irrigated), other permanent crops (mainly citrus, almond trees, vineyards, etc. totalling 3,000 km2) and coastal intensive irrigated crops (1,000 km2). Within forest land, the system is the agroforestry system “dehesa“, with around 12,000 km2.

There are 242,016 farms and they have an average size of 21.1 hectares (14.7 hectares if only utilized agricultural area is considered). However, a large part of the farms is small (around 60% have less than 5 hectares indeed).

Within this case study region there are several hotspots of agricultural and forestry systems (AFS) worth to be empirical analysed because relevant issues regarding the provision of public goods and bads. However, based on stakeholders participating in PROVIDE workshops, the most interesting case study is the mountain olive groves, mostly located in central, northern and north-eastern parts of the region (in the mountainous ranges of Sierra Morena and Sierras Béticas, especially). According to the participants, most important public goods provided by this agricultural system is biodiversity, although fighting climate change and soil conservation are also relevant.

Olive groves represent the main agri-forestry system in Andalusia, covering 1.52 million hectares. It is a key generator of income and employment in the rural areas where it is located. The vast area of olive groves in Andalusia encompasses a heterogeneous sector, within which a wide range of different systems can be identified, including the so-called “mountain olive groves” (MOG). This type of olive groves is typically located on steep slopes in poor, shallow soils, resulting in low yields. This, along with the high production costs due to the difficulties of mechanisation, makes it an agricultural system with low economic profitability and at high risk of abandonment of agricultural activity.

For the purposes of this research, the MOG is characterised as one growing under rainfed conditions in areas with slopes of 15% or more, and average olive yields equal to or less than 2,500 kg/ha. Thus defined, MOG cover 211,000 hectares in Andalusia, representing about 14% of the total area of olive groves in the region.

The low profitability of the activity and the difficulties in employing mechanised farming methods in this type of olive grove make it an extensive, “high nature value” farming system. Indeed, the low intensity work and limited use of agrochemicals, together with the maintenance of long-standing plantations and traditional elements such as walls, hedges, riverbank vegetation, etc. have enabled this system to continue providing environmental public goods, especially those related to biodiversity. In any case, the provision of the biodiversity public good by this agricultural system is under threat due to both the intensification processes aimed at improving productivity and profitability, and the abandonment of agricultural activity on those lands. This reveals the possible existence of a market failure, insofar as the level of biodiversity production is suboptimal from a public perspective, given the growing social demand for it. In such a case, public intervention would be justified in order to encourage the use of agricultural practices that improve the provision of this public good. 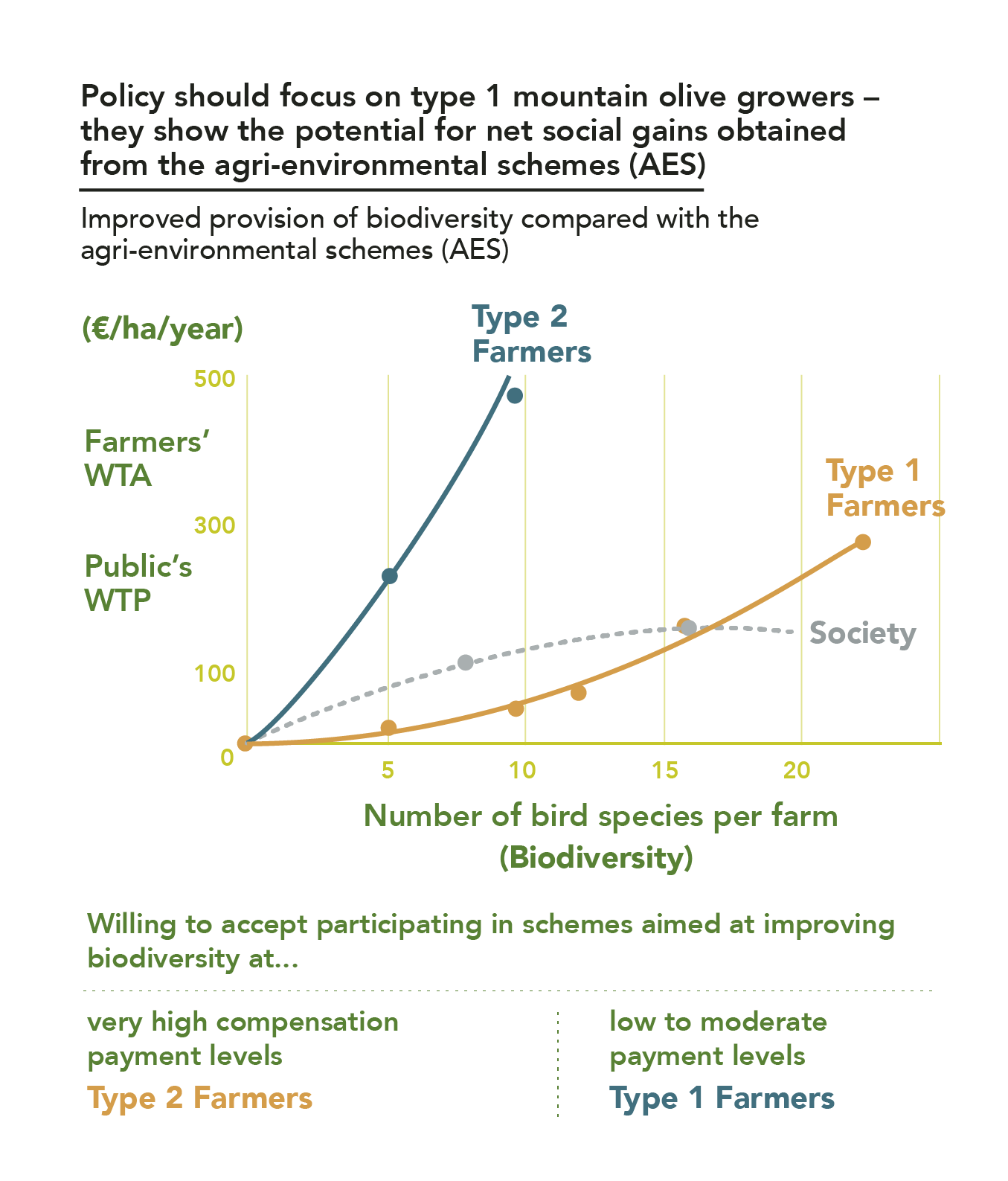 The valuation of the improvement in the provision of each public good compared with the current situation has been calculated both for the demand and supply side, on the basis of social preferences regarding the public goods supplied and the cost of implementing different combinations of environmental friendly practices. Read more… 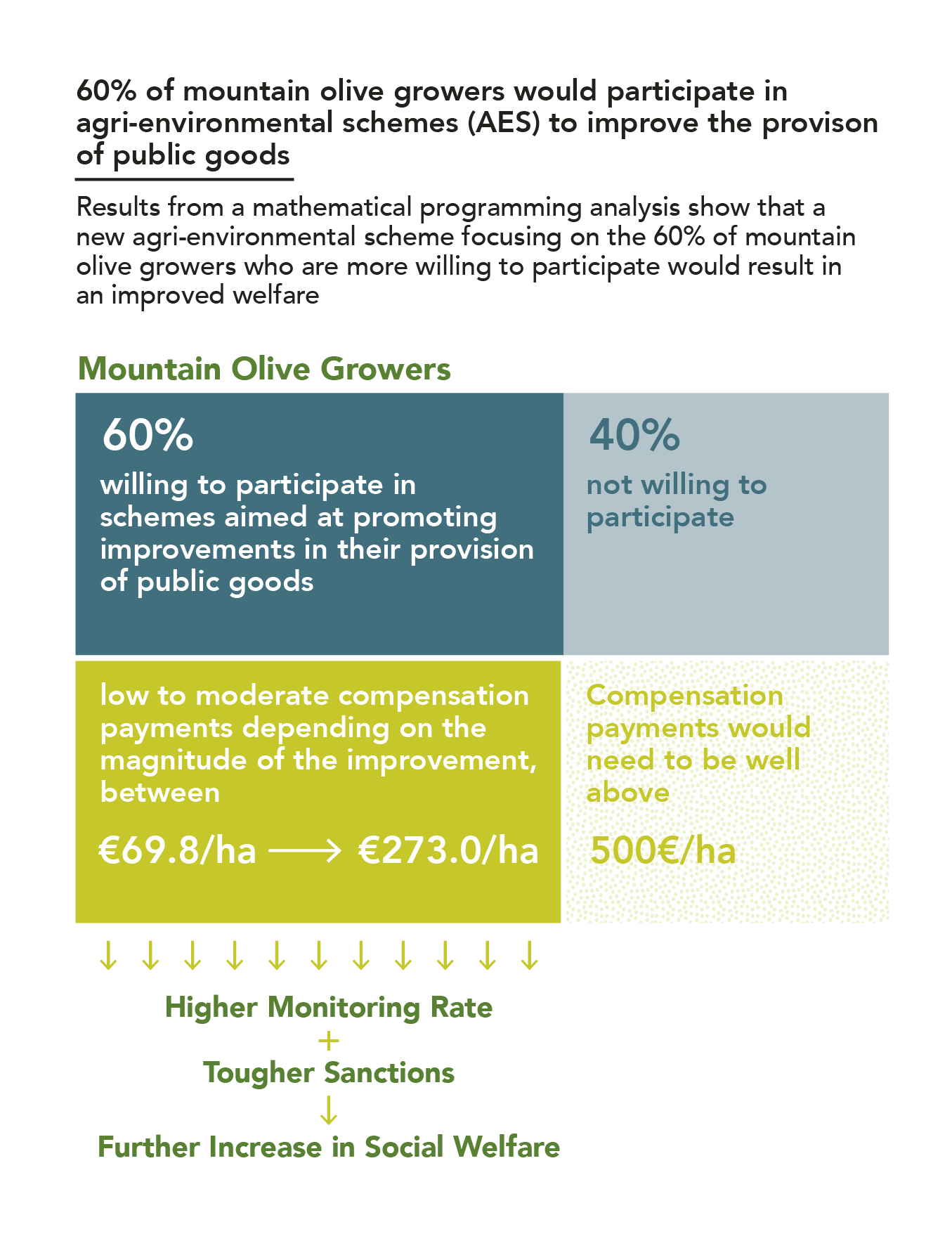 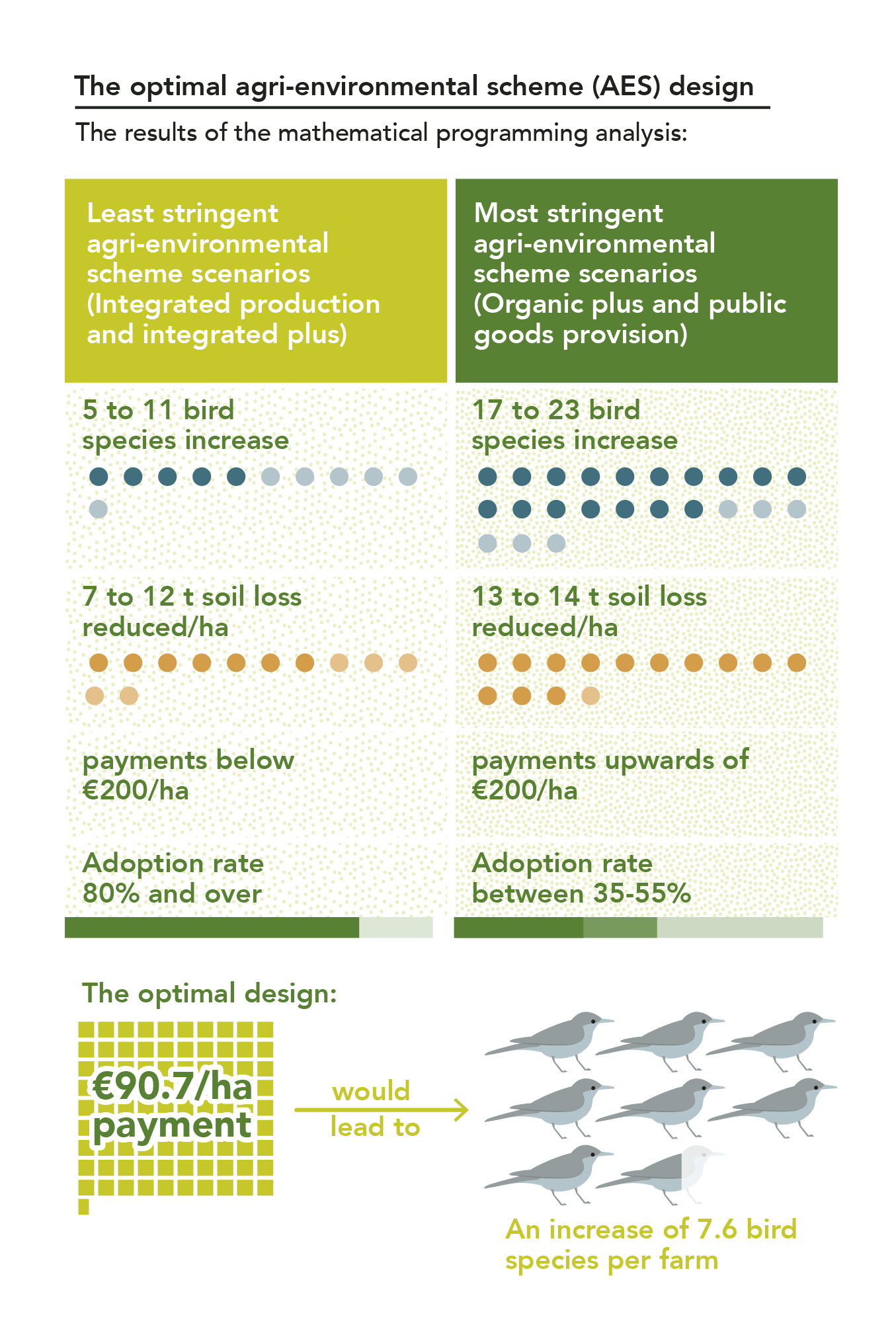 60% of mountain olive growers are willing to participate in the AES proposed as the most suitable governance mechanism aimed at promoting significant improvements in their provision of public goods at low to moderate compensation payments. Read more…