The case study region “Marchfeld” is located in the North-East of Austria. The area is part of the sedimentary basin between the Easter Alps and the Carpathian Mountains and is characterized by semi-arid climate, with hot, dry summers and cold winters. The region is distinctively flat. The soils in the case study regions are mainly deep and fertile chernozems, characterized by rather dry conditions. Precipitation in the area is low and reaches between 500 and 600 mm/a.

Our case study region consists of 23 Marchfeld municipalities covering 70.800 ha. The average population density is 97 persons/km², but density strongly varies in the single municipalities and reaches from 15 to 881 persons/km². Since about 10 to 15 years, the region experiences a strong population growth, caused by in-migration.

Agricultural management is carried out on around 50.800 ha utilized agricultural area (UAA). 95% of the farms in the case study region are cash crop farms, around 12% of all farms are organic farms. The good soil quality in combination with the possibility of irrigation, which is given due to the Marchfeld channel leading through the area, lead to an agricultural system characterised by intensive arable production. 98% of UAA is used as arable land, around 25% of agricultural area in the region is managed under irrigation.

The Marchfeld is framed by two major capitals, Vienna and Bratislava. This leads to a multitude of sensitivities and claims affecting the regions, such as urban outmigration, recreation demands, space requirements for infrastructural planning (e.g. roads, highways, flood protection, etc.) and regional food supply.

One major public good issue for the regional stakeholders and experts in the Marchfeld is the functionality of the agricultural soils. Particularly due the intensive agricultural management, but also due to the climatic conditions in the Marchfeld, soil fertility and soil health are assumed to be endangered, while simultaneously representing the most important basis for agricultural production.

Soils conditions are identified by the stakeholders to have impacts on other public goods in the region and to touch important environmental issues such as climate, groundwater, erosion, etc. Here, particularly the quality of the groundwater in the Marchfeld is seen as a critical point. At the moment, groundwater quality in the Marchfeld is poor compared to other Austrian regions. This is first and foremost due to the level of nitrate pollution resulting from agricultural management, combined with the low precipitation rates leading to insufficient dilution. In many parts of the Marchfeld, groundwater treatment is inevitable to reach the standard values for potable water. To improve soil functionality and consequently also reach a positive impact on groundwater quality, changes of the agricultural management are suggested by the experts and stakeholders. Mainly these changes include measures to increase soil humus contents such as minimum tillage, intercropping and the mixing of straw, compost and harvest residues into the ground. Also changes of crop rotation are seen as potential ways to reduce chemical fertilisation and enhance soil fertility. 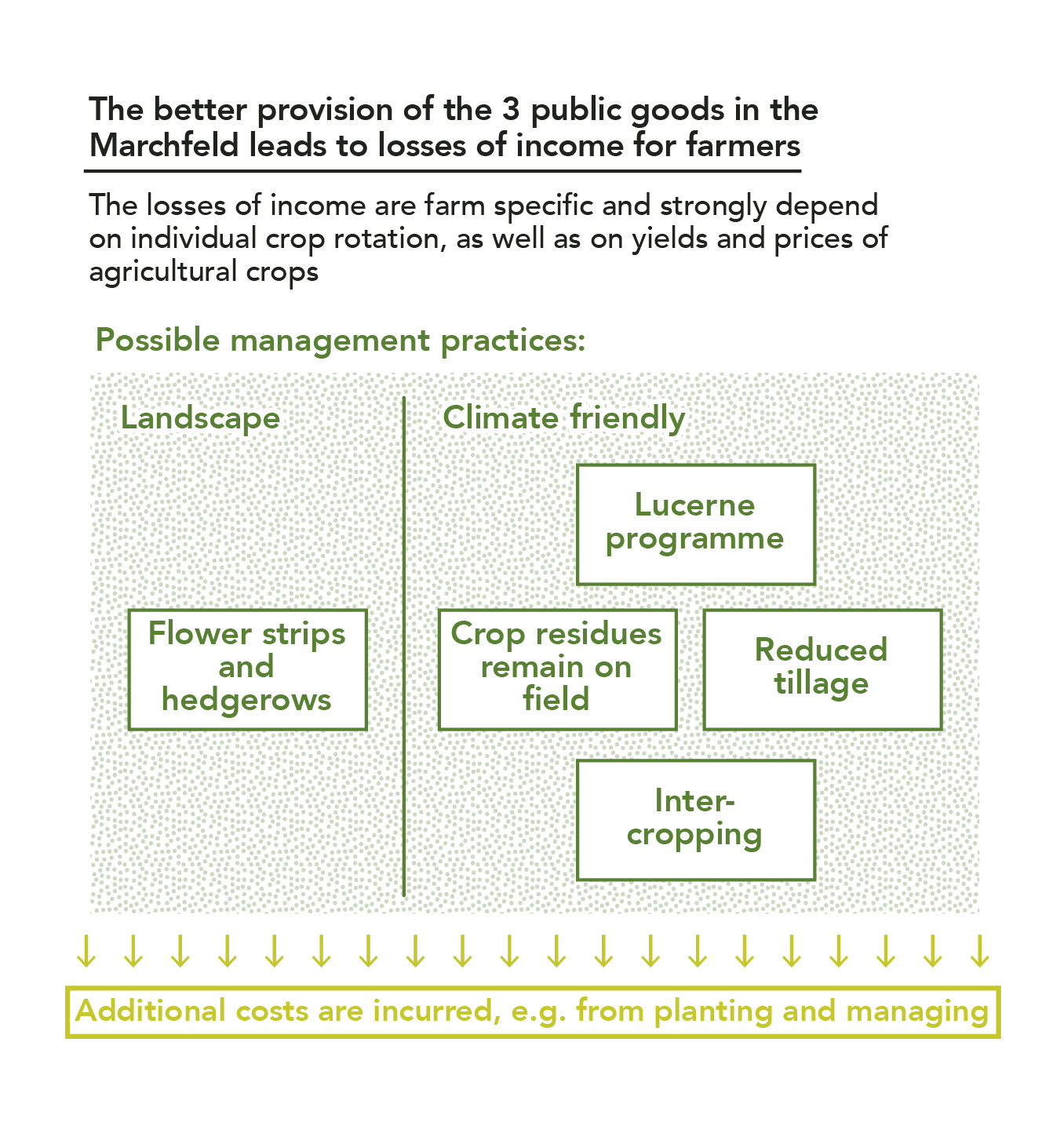 To analyse the agricultural cost of providing the public goods „climate stability/soil functionality“ and „diversity of agricultural landscapes“ in the Marchfeld, we carried out cost calculations on municipality level. Read more… 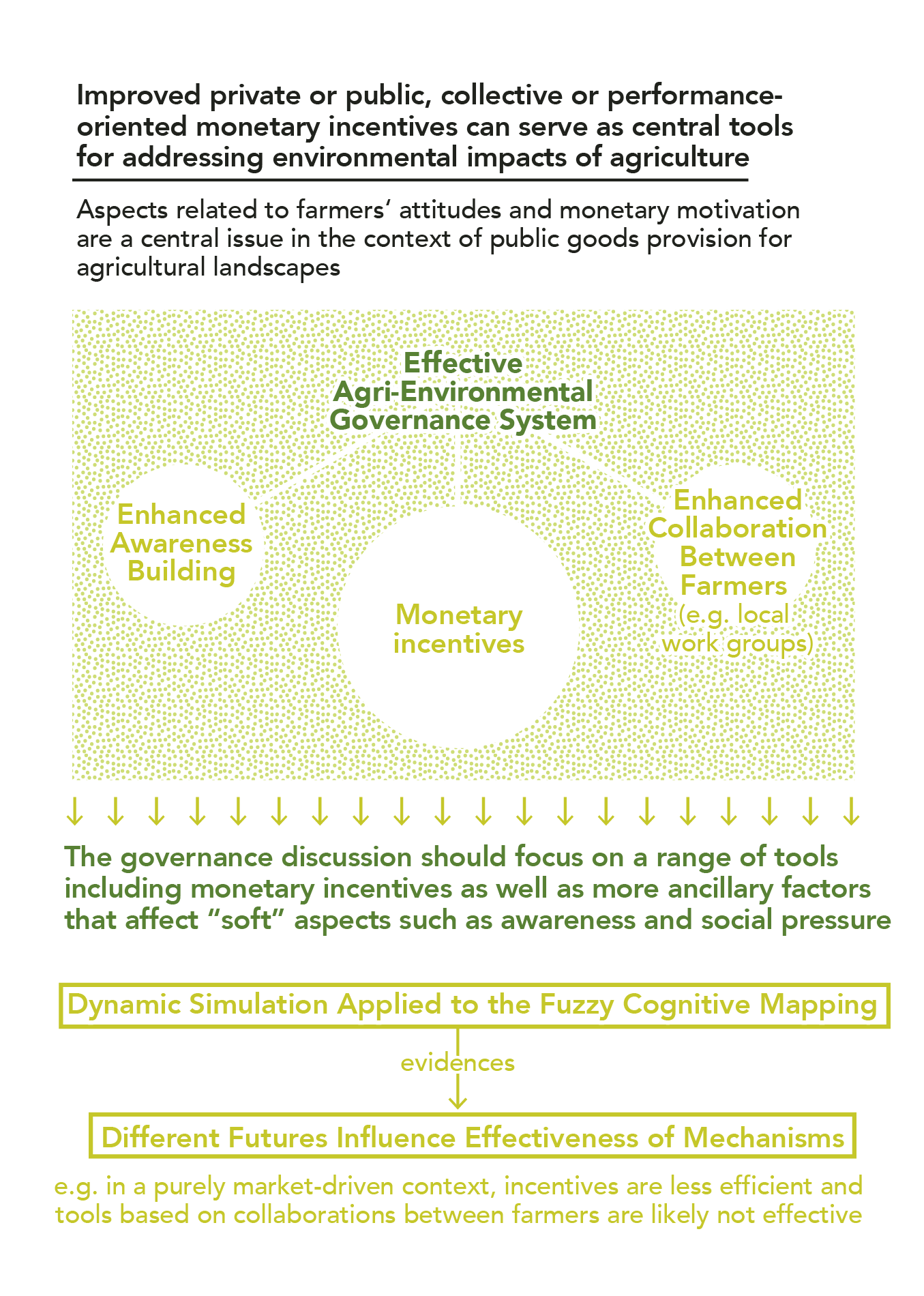 Monetary incentives are considered central tools featuring a number of connections in the system between mechanisms and public good provision, but also ancillary factors like enhanced collaboration between farmers or enhanced awareness building are important parts of an effective agri-environmental governance system. Read more…

Here you find outcomes of the participatory workshops and material concerning the region in national language.