Public good or land management practice addressed: Improvement of the quality of forest landscape in a nature tourism area

Research question:
1. How do the respondents (representatives of NBTs and GSs) assess the present landscape quality of the area for their business?

2. If the quality of forest landscape around the resort would improve considerably how much would this increase the business in terms of revenues or number of customers?

Methods applied:
1. A method resembling Contingent Behavior, i.e. “How much the business of your company would increase if the landscape quality improves some way in the tourism area?”
2. An online survey to NBTs and GSs doing business in the Ruka-Kuusamo nature tourism area, northeastern Finland

3. Size of the sample: 44 entrepreneurs or business executives of the companies

How the respondents (representatives of NBTs and GSs) assess the importance of good landscape quality of the area for their business? More precisely, respondents were asked how much a pleasant landscape in commercial forests would benefit different aspects of their business assessed with a five grade scale from “extremely beneficial” to “not at all beneficial”.

Figure 1: Branches of business and benefits that companies expect to get from improved management practises of commercial forest.

If the quality of forest landscape around the resort would improve considerably how much this would increase the business activity in terms of revenues or number of customers? 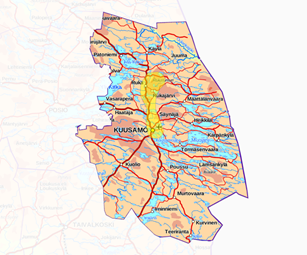 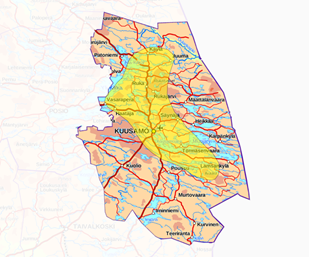 Figure 2: Core area (left) and wider area (right) where the hypothetical increase of landscape quality would be implemented 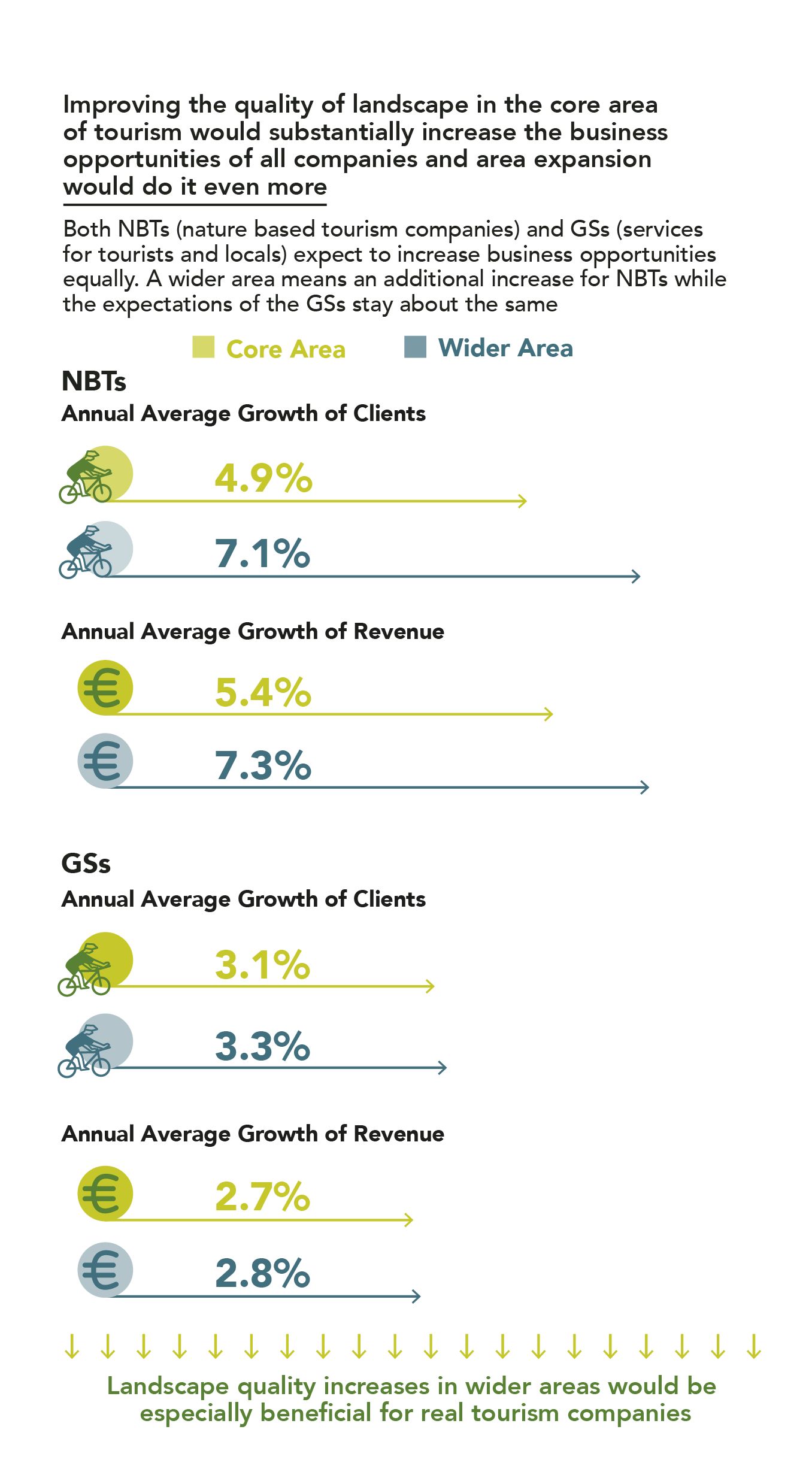 Table 1. Increase of number of clients and revenues that companies expect to get from the improved quality of landscape with two spatial scenarios.

The valuation technique was an application of attribute-based contingent valuation method. The survey was targeted to private-forest owners in the Ruka-Kuusamo area. Using the register of the members of the Forest Management Association, Kuusamo (the local forest owners’ association), the sample of the survey, consisting of 1,335 persons, was selected from the population of approximately 3,050 private citizens owning forests in Kuusamo municipality. 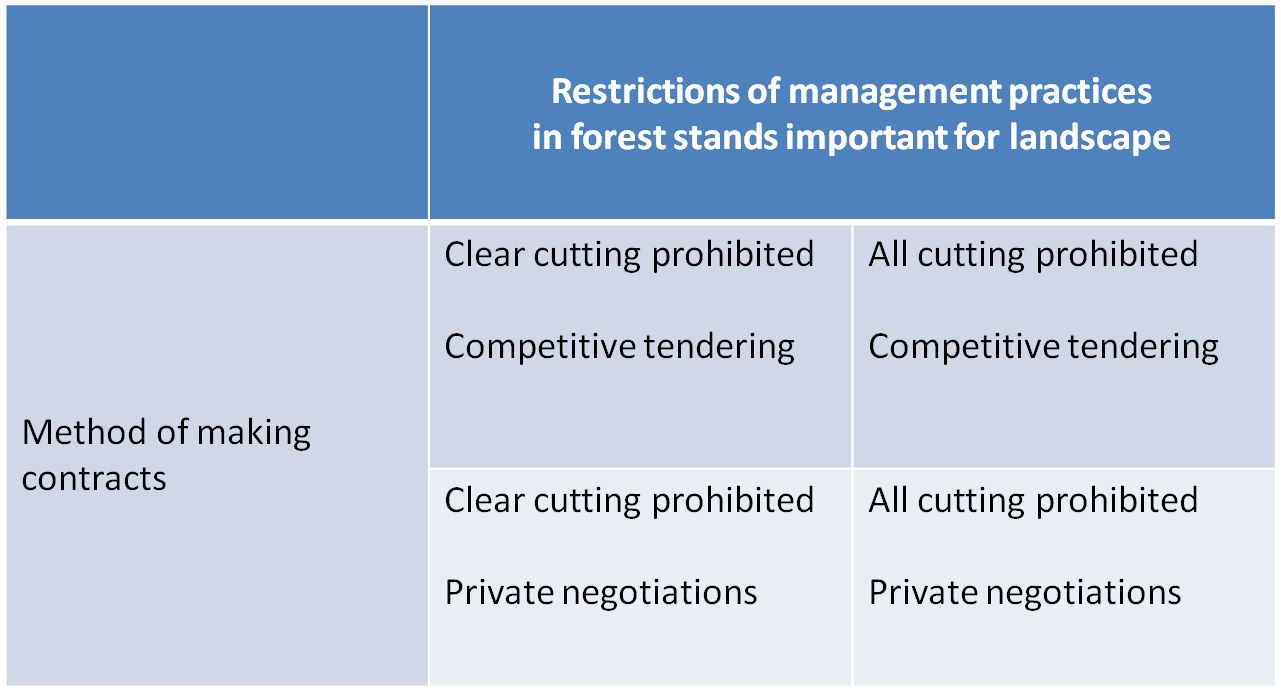 The survey was conducted as a postal survey between December 2016 and February 2017 and produced 476 responses, achieving a response rate of 35.7%.

Each respondent were asked state a compensation claim for four alternative contracts:

What is the assessed participation rate and what are the determinants explaining the participation of forest owners in a planned future PES, i.e. Landscape and Recreational Values Trading (LRVT)?

73.6 % of the respondents were at least a bit interested to participate in LRVT. The probability of participation increases if, along with landscape values, the level of biodiversity improves. This indicates that respondents gain personal benefits from enhanced biodiversity in their own forests. The probability of participation decreases if the rules of forest management practices are more restrictive.

In explaining forest owners’ participation in LRVT, several factors were significant. If the restrictions to management practices in forest stands would prohibit all cutting, the tendency to participate in the mechanism decreased compared with a reference case in which only clear cutting was prohibited and selective harvesting was allowed. Thus if a forest owner has to restrict his or her management options more, he or she will be less eager to join.

Emphasizing the biodiversity improvement in the framing of the valuation question of the survey increased the probability of participation. Additionally, those who have used clear cutting as their main method of final felling in their forests are more often willing to participate. Furthermore, the larger the proportion of forest area that a respondent is ready to supply for LRVT, the more likely it is that she or he is willing to participate. Finally, the higher the respondents prioritize the rural landscape in terms of the allocation of more money to public goods in general, the greater the probability that they will be willing to participate in LRVT.

What is the average level of compensation payments claimed by forest owners and what are the determinants explaining the compensation claims? (This compensation can be seen as a stated cost of provision or a willingness to accept (WTA) compensation for improving a public good, the quality of landscape.)

As a starting point for the analysis of stated WTAs, we calculated that the mean value of compensation claims by forest owners was €328.9 per hectare per year with 95% confidence limits of €300.3–€357.5. The monetary amount of compensation claimed by forest owners in LRVT is explained by five significant variables. With respect to the restrictions to management practices in forest stands included in LRVT, the case in which all cutting is prohibited tends to increase claims by €73/ha/year compared with a reference case in which only clear cutting is prohibited. The logic here is clear: if a forest owner has to restrict his or her harvesting possibilities more, he or she has to be paid more. The mechanism design also matters. If contracts are to be made through private negotiations instead of competitive tendering, the owners would claim €65 per hectare per year less. Hence, the respondents seem to prefer private negotiations to competitive tendering. In addition, if a respondent has refrained or is interested in refraining from all cutting in his or her mature forests, he or she would claim €142 per hectare per year less compensation than otherwise. Finally, respondents who earn more than €6,000 per month after taxes would claim €149 more compensation annually for a 1 hectare increase of forest included in a LRVT contract than the rest of the respondents.

If divided into two groups and protest responses canceled, 44 % of respondents claim 318 euros and 56 % 82 euros per hectare per year. Thus there is a remarkable share of forest owners interested in making contracts with reasonable compensation.

We analyzed heterogeneity in compensation claims estimating a latent class model (LCM) with two slightly different data sets (Table 2). The first model included all the respondents’ compensation claims. In the second model, we excluded claims higher than €300 from the data set. The excluded responses can be considered as protest bids. Alternatively, these bids can include some other values than lost harvest revenues caused by the contracting; for example, landowners’ expectations of high land values in construction use. We examined respondents’ “taste” variation for the harvest restrictions (RESTRICT) and the mechanism design (NEGOT). To shed further light on the differences in the stated WTAs between classes, we used INTER (the interest of participate) as a class membership variable. Two-class models were used in the LCM analysis.

The WTAs differ considerably between the two classes. The coefficient of CONSTANT presents the average reference WTA that is not captured by the other explanatory variables. Hence, class 1 clearly has a higher WTA (€712) than class 2 (€162) in the first model, which includes responses larger than €300. The outcome has a similar pattern in the second model, in which responses larger than €300 are excluded, but the WTAs are clearly lower (i.e., €319 and €82), and the difference in WTAs between the two classes is substantially smaller. The class probabilities of the models show that 23.9% belong to class 1 and 76.1% to class 2 in the first model, while, in the second model, the allocation of the observations between the classes is more equal, specifically 44.1% and 55.9%, respectively. These results indicate that about 37% of all the respondents (476) are willing to participate in LRVT with average compensation of €177 per hectare per year (large claims included) and about 20% are willing to participate with compensation of €99 (large claims excluded), respectively.

The coefficient of RESTRICT is strongly significant for both classes in the second model, indicating that forest owners claim more compensation for a contract that, instead of clear cutting, prohibits all cutting in forests included in a LRVT contract. Interestingly, RESTRICT is not significant for class 1 in the first model. Hence, this segment of respondents, which has the highest stated WTA, did not seem to take into account the harvest restriction when considering their compensation claims. Comparing class 1 in the two models, the estimate of RESTRICT more than doubles from €46 to €118, demonstrating that the coefficient of RESTRICT for class 1 is sensitive to the treatment of the highest compensation values. At the same time, the comparable estimates of class 2 remain quite stable at €48 and €41.

NEGOT is non-significant for both classes of the models but has negative signs, hinting that forest owners might claim less compensation for a contract that uses private negotiations as the method of making contracts in LRVT. INTER has a minus sign with a weakly significant coefficient in the first model and a strongly significant coefficient in the second model for class 1, indicating that the less interested a respondent is in participating in LRVT, the more probable it is that he or she belongs to class 1. Hence, the respondents with the highest compensation claims are not especially interested in participating in LRVT.