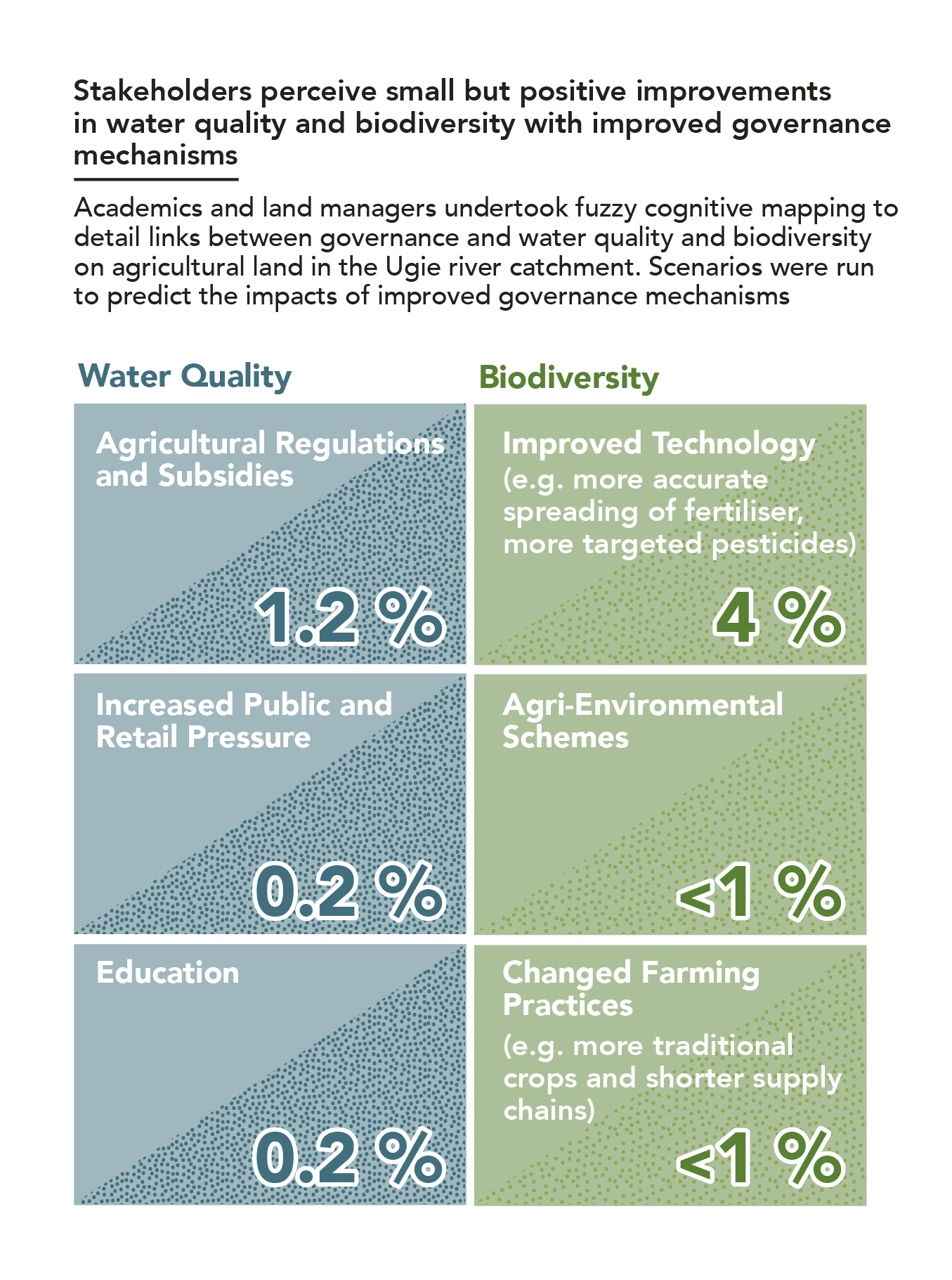 The study uses a participatory fuzzy cognitive mapping (FCM) approach, in order to analyse the interplay of a mix of mechanisms and other influencing factors on the provision of the public goods water quality and biodiversity. In the study, 2 individual mechanisms mixes have been analysed for the 2 public goods.

For water, the suite of selected governance mechanisms (based on discussion during the 3rd regional stakeholder workshop) consisted of green subsidies, catchment partnerships, environmental regulation, education & extension services (for both the general public as well as farmers), public pressure and green labelling.

Stakeholders emphasised improving the way existing mechanisms are used rather than employing completely new ones. This included better coordination between different actors as well as different governance tools so that these would work together and reinforce each other rather than taking piecemeal approaches or sometimes pulling in opposite directions. In order to be targeted to the topic the participants thought that there needed to be a clear connection between actions, governance mechanisms and outcomes, and that there needed to be clear objectives. In addition, reliable, long-term funding and maintenance of targets for governance tools were seen as crucial to achieve substantial outcomes as well as the ability to take into account complexity and diversity at the local level and involving both local and national level actors.

Expected improvements for the provision of the public good after implementation:

Participants discussed that more holistic approaches would produce more benefits than just increases in the numbers of species and water quality. They expected that better implementation and coordination of these measures would also improve soil quality and reduce erosion, improve land productivity, reduce the need for inputs and water treatment, and increase carbon storage. They would also provide extra benefits in the form of increased (or maintained levels) of pollinating insects, increased and healthier fish populations and more recreation opportunities. Health benefits could also accrue if the production of some ‘luxury’ goods (e.g. beef) were reduced. In addition, more targeted approaches could help to avoid unintended negative outcomes, reduce transaction costs and improve effectiveness. Likewise, emphasising cooperation and extension, could help to increase trust and reduce the need for costly monitoring (of farmers). Finally, including both local and national levels could help to increase the acceptance of governance measures.

Fuzzy cognitive mapping is a semi-quantitative method to explore system dynamics, including the effects of feedback loops and time lags (Kok 2009). Fuzzy cognitive mapping consists of first identifying the factors driving a system and then identifying how these factors influence each other, including specifying the  direction and strength of the influence using relative numbers (e.g. -1 to +1). The model can then be run in a series of iterative steps to learn about the behaviour and trajectory of the system. The strengths of the influences as well as the outcomes in terms of changes in the factors in the system are given in relative values only. The method is therefore not suited to predict outcomes in terms of absolute values. Advantages of the method include that feedback loops can be included and that qualitative information and expert knowledge can be used as input in the creation and validation of the model.

To implement the modelling we conducted two workshops, one with researchers (natural and social scientists) working on issues of environment and governance at the James Hutton Institute in August 2017, and one with local stakeholders (mostly associated with farming) in the case study region in October 2017. In each workshop participants were divided into two groups, one looking at water quality and one looking at biodiversity. At the beginning of the workshop participants were informed about the results of the valuation studies, so they could take this information into account during the model construction. The valuation results were not explicitly included in the models given that fuzzy cognitive mapping uses relative numbers only. For the same reason and taking into account discussions at the previous regional level stakeholder workshop no specific target levels were specified for water quality or biodiversity. Instead, emphasis was on identifying drivers and barriers for the improvement of public good provision and understanding the system dynamics.

Separate models were co-constructed for water quality and biodiversity. The facilitators used the online fuzzy cognitive modelling tool ‘mentalmodeler’ as the visual interface for the construction of the model and a laptop connected to a projector so that participants could see how their input was translated into a structure for the model. As starting point for the model we presented the workshop participants with a set of factors (represented by boxes) including the governance mechanisms and private as well as public goods (including but not limited to water quality and biodiversity) from agriculture identified in previous workshops held at the regional level (Aberdeenshire). The facilitators went over all the factors with the participants, and gave them the opportunity to modify these and/or add new ones in. Participants were then asked to identify how different factors influence each other by connecting the factors with arrows showing the direction and type of influence (negative or positive). For each identified relationship, they were then asked about the strength of the influence, which was represented by numbers between -1 and +1 (the closer to -/+ 1, the stronger the influence). Discussions were an important part of the process, and these were audio recorded as well as captured through notes. After constructing the model with the participants, outcomes of changes in the governance factors (and later on the scenario factors) were explored both in the mentalmodeler online tool and in the excel based modelling tool called ‘FCMapper’ by setting individual governance mechanisms (and scenario factors) as well as the total combination of governance mechanisms to a high level and inspecting the outcomes.

Kok, K., 2009. The potential of Fuzzy Cognitive Maps for semi-quantitative scenario development, with an example from Brazil. Global Environmental Change 19, 122-133.