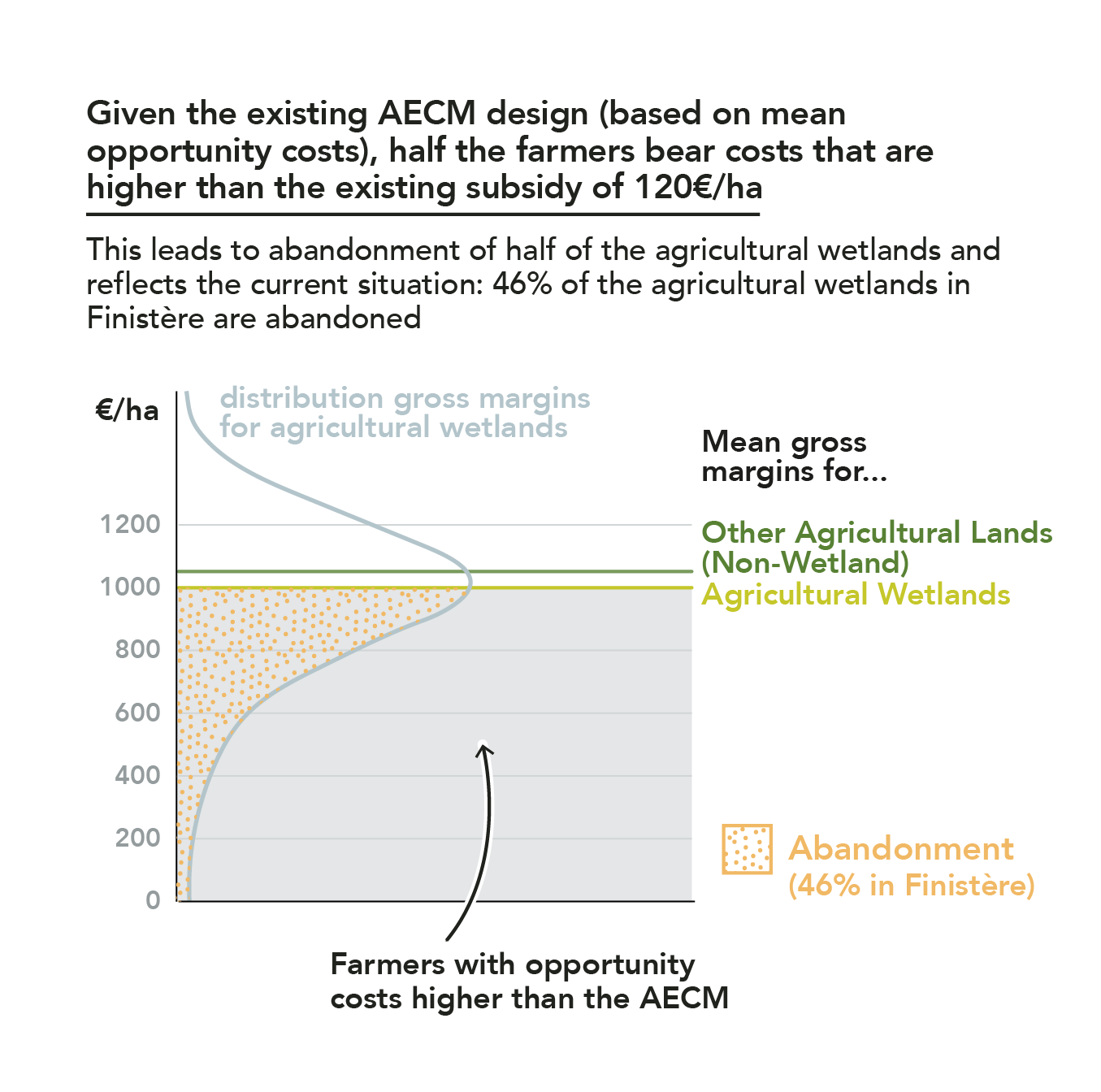 Today, the current AEM proposed to the farmers do not prevent high abandonment. Local stakeholder has stressed the need to improve the system governance in order to maintain farmers on wetlands, notably on valuable ones (to simplify, the closest ones to Quimper). The main worry of local stakeholders is to have more freedom to take into account the diversity of the situations (i.e. the heterogeneity of the supply of environmental service), notably to offer higher subsidies to farmers managing abandoned but potentially high valued wetlands.

One possibility for such freedom is to implement to a Payment for Environmental Service mechanism, which best suited the high variability of demand for local public goods. Indeed, several stakeholders such as water companies, angler associations or local communities are interested in the agricultural wetlands because they benefit to their activities. The PES offers legislative solutions to these stakeholders to propose incentive payments to farmers for the objective of maintaining farmers on the wetland area. The PES payments would be complementary of already existing AEM.

The governance mechanisms is it assumed to be better than the ones that are already in place, because it is based on stakeholder knowledge on the local demand. Thus, they can best adapt the proposed payments to the demand, taking into account for heterogeneity of local public good preferences.

The approach of the model:

The model we present is fully developed in the work in progress proposed by Bareille & Zavalloni (2018). The model compare welfares from an economy in three situations: (i) the case where the central government is in charge of the design of agri-environmental schemes, (ii) the case where the local government (e.g. a region or a city) is in charge of the design of agri-environmental schemes and (iii) the case where both governments participate to the design of complementary agri-environmental schemes. Both governments face an exogenous budget constraint: the share of the Common Agricultural Policy devoted to AEM (i.e. 4% of the EU common budget). The proposed model is inspired from the literature on fiscal federalism (Epple and Nechyba, 2004), and in particular, on environmental federalism (Oates, 2001). The aim of this literature is to examine the effectiveness of decentralization of public instrument design, considering both advantages and disadvantages of decentralization. The advantages are notably due to the knowledge of the heterogeneity of local demand and supply. The disadvantages are either the effectiveness of public money management (transactions costs benefit from scale economies) or the externalities generated from one region to the others. The aim of the analysis is to examine the effectiveness of AEM towards lower level of governments.

Oates, W.E. (2001). A reconsideration of environmental federalism (Resources for the Future Washington, DC).