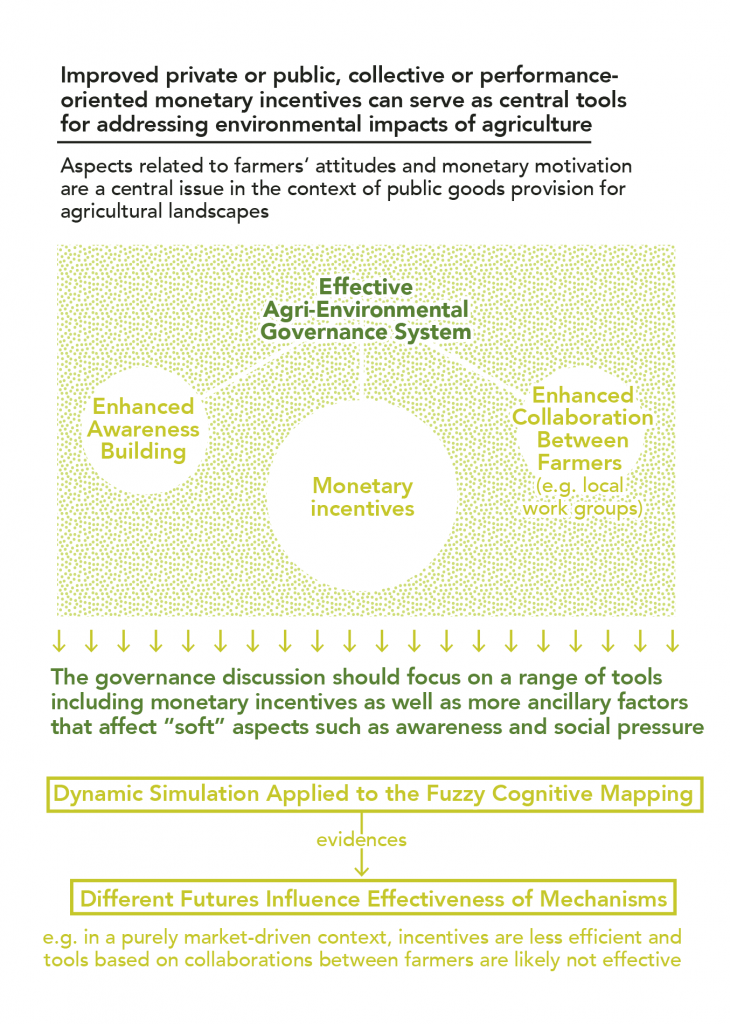 For the improvement of soil functionality in the Marchfeld we test two different monetary incentives: one is a payment for ecosystem services program in form of a sale guarantee combined with a result-based premium for measurably enhanced humus content in the soils. The mechanism was inspired by an existing scheme promoted by SPAR, and WWF, called “Healthy soils for healthy food”. In this program, farmers are committed to building high-quality humus soils by implementing suitable soil management measures.  Farmers‘ conversion to humus-building management is rewarded with a sales guarantee of the crops/vegetables grown on the humus-building area, as well as a payment per ton CO2 stored in the ground. Measurement of the changes in humus content is conducted by WWF Austria. The second monetary mechanism is a collective bonus in form of a public payment (e.g. in the framework of the Common Agricultural Policy of the EU). The instrument works via public payments per hectare, which gradually increase in accordance to increasing amounts of area under the respective management in the region. It is expected that farmers taking part in the scheme, will increase their personal efforts to encourage other/neighbouring farmers to take part, in order to realise higher public payments.

In addition to the two monetary incentives we assess different supporting mechanisms: one is the foundation of a local, voluntary collaborative partnership in form of a local work group, which is installed in order to support the design and the implementation of the management measures. The partnership is a cooperation of interested conventional and organic farmers (leading farms), the Ministry of agriculture, the national association of organic farming (Bio-Austria), and the machinery ring. It is supervised and supported by experts and scientists to include resent knowledge and state of the art. The partnership works voluntarily and therefore as far as possible without external funding but with organisational support. The partnership’s major goal is to support the implementation of the management changes on participating farms in providing knowledge, training and also the latest technology and machinery, which can be used across single farms (through the machinery ring). Additionally to this mechanism, effects of supplementing awareness rising measures as well as labelling and marketing concepts are tested in the model.

From the stakeholders’ point of view, the proposed strategy mix is an improvement of the existing schemes due to different factors: Installing a local work group, which is involved in the design of the management activities as well as in the technical and educational support of the implementation, will guarantee that the measures are targeted to the local context, as well as that farmers have the ability to implement the measures. As regards the collective bonus, major advantages are seen in the potential to start communication processes between farmers, as well as in the higher payments as a reward going beyond cost compensation. As regards the SPAR humus project, mainly the sales guarantee is seen as an important trigger motivating farmers, perhaps even more than payments per area.

Public good provision: As regards soil functionality, it is to be expected that an uptake of the management changes will increase humus content of the soil continuously, however the measurability of success will be critical as external factors (climate, precipitation, etc.) have a strong influence on humus accumulation.  As regards water quality, it is expected that measurable changes will be reached only in the long term. This is due to the big groundwater reservoirs with an average retention time of about 50 years. Also, nitrate content is strongly affected by external factors as well, mainly by precipitation determining dilution rate as well as leaking.

Uptake of governance mechanisms. As regards the collective bonus based on the collective partnership, a slow growth of uptake rates is expectable: while in the beginning mainly farmers involved in the collective partnership will take part, it is likely that neighboring effects will increasingly take place, as partaking farmers will advertise the measure for gaining higher compensation payments. As regards the SPAR Humus program, it is expected that this will remain a “side” mechanism, however fully exploited to the maximal extent of area funded by SPAR.

The results show that integrating private or public, collective or performance-oriented monetary incentives with other non-monetary mechanisms like enhanced collaboration between farmers or enhanced awareness building are evaluated as central for an effective agri-environmental governance system. Moreover, the results show that different futures have major effects on the effectiveness of mechanisms: In a purely market-driven context, tools based on collaborations between farmers are likely less effective and monetary incentives are less efficient. On the other hand, the positive pressure of society and non-monetary governance initiatives expected in a sustainability-driven scenario are able to catalyze an efficient adoption of environmental-friendly practices also at lower rates of monetary incentives.